*Not from Sarah: Here’s an inspiring story from blog reader, Christena on how thinking outside the box, focusing on fun, and living life to the fullest helped this family get back to a healthy and happy paleo lifestyle!  Christina also shares an interesting observation on how society appears to be simply accepting the fact that the majority of people are continuing to become larger and sicker by the minute and rather than trying to change this reality we are beginning to simply adapt to it… Yikes!!

My husband and I learned about paleo in 2008. We read Loren Cordain’s book and lived it to the letter. Many, many months later, two things happened: 1) we started to get burned out on paleo and 2) I became pregnant.

We were very strict in our habits: limiting and/or eliminating eggs, vinegar, salt, sweet potatoes, butter, etc. We pretty much grilled some lean meat or game and ate some steamed or sautéed veggies. Plus fruit and nuts. I wasn’t familiar with any other paleo resources or the paleo community.

I pretty much learned how to cook by watching Rachael Ray on Food Network. Although we didn’t have much difficulty switching to paleo, I started to miss the way I used to cook—casseroles, crock pot, baked dishes, gravy. I didn’t have any paleo recipes and I just didn’t know how to translate some of our old favorites to paleo. (Once, I tried doing a paleo shephard’s pie with mashed cauliflower=fail)

Plus, I had no guidance for a paleo pregnancy and just didn’t feel it was sustainable. I was hungry. I wanted more carbs. We ended up incorporating some sprouted grain breads, lots of beans, etc. We weren’t entirely carb-o-holics, but I wouldn’t classify us as paleo anymore either.

Fast forward to two kids and the social media explosion later. Somewhere along the line I also discovered CrossFit, and while pregnant, I “liked” CrossFit Mom on Facebook. I think this action triggered the rest of the story.

One of the sponsored ads on the side of my Facebook wall was for a page called “Paleo or Die.” I hadn’t thought about paleo in over a year, but decided to “like” the page. A few weeks later, he posted a list of paleo blogs he recommended and one of them was your blog. From that day forward, we were paleo again. I discovered your blog and podcast, Chrissy’s blog, Robb Wolf’s blog and podcast, and most importantly, YOUR RECIPES! I read The Paleo Solution and Everyday Paleo.

You made paleo cooking FUN again and helped me learn to think outside the box. You also made paleo more achievable and sustainable for us. It’s not all or nothing. It’s delicious and nutritious, and I’m so proud to be teaching my kids healthy eating habits.

I went clothes shopping this week. I’m a size 4 (used to be a size 8). Two thoughts on this:

Point 1) I know I have lost some weight, and I feel and look great. However, I think the industry is increasing the sizes of clothes across the board. Americans are getting larger and larger, and instead of giving people a reality check on their increasing girth, manufacturers are just upsizing (or “super sizing”) clothing, so you can remain a size 8 or size 10, when in reality you’ve become a size 10 or size 12 … but now there’s no guilt about it. [Am I getting a little conspiracy theory crazy on this?!] I honestly can’t remember ever being a size 4 in my entire life. Though I wouldn’t say I was ever overweight. Rather than me getting super tiny, I think the clothes have just gotten bigger. I have size 8 items in my closet that I’ve had for 10+ years and they still fit (a little looser, but not falling off my hips like today’s size 8).

Point 2) I noticed something else in the clothing store this week. Sizes 12 and 14 had entire rows; sizes 8 and 10 slightly less than an entire row; sizes 4 and 6 less than half a row; size 2 or smaller nonexistent. Society is getting larger and sicker, and it makes me sad. I’m grateful for people like you and Robb Wolf who are making an effort to educate the masses.

So, very long story just to say THANK YOU! You’ve changed my family’s life, and I’m so grateful that you’ve put your life and your knowledge out there.  Our favorite paleo recipes include Puerto Rican Beef, Sundried Tomato Chicken Bake, and Thai Green Curry. 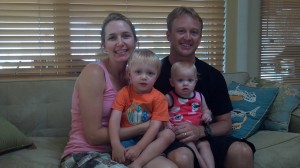