I might be a lot of things, but one thing that I know I am is a pretty gosh darn compassionate person.  I know it sounds kind of corny but I really do care.  So here’s my life: I have this blog, now a podcast, wrote my book, I answer questions, take care of three kids, help my husband run a business, train at Norcal, work-out, clean my house, walk the dogs, do the laundry, make the beds, wash the dishes, oh and wait – I COOK PALEO MEALS!!  Is it hard?

Well, I guess so, but so is everything else on my list but I don’t stop taking care of my kids because “it’s hard” or boycott the laundry because, “it’s hard.” There has not been a week when I have said, “You know what kids, getting you to bed on time is really hard, therefore, just stay up late, sleep in, and miss school.” That might sounds like a decent plan except the next day, what would there be?? Consequences.  So why do folks slide when it comes to making healthy food and by using the “it’s too hard excuse?”  Going to work is hard, getting out of bed is hard, cleaning up is hard, but we do THOSE things without looking for an easy way out.  How do we manage everything else and then decide to forgo the eggs in the morning and reach for the instant oatmeal because somehow it’s “easier?”  Sorry folks, but this is when my compassionate self goes a little bonkers and I want to grab you by the shoulders, shake you hard and say, “Suck it up!!”  The reality is, I am not any less busy than you and neither are thousands of other families around the globe making a paleo lifestyle happen.  I could give you several tips, and I have, and I will continue to because I love doing that, but the biggest piece of advice is this:  If you want to make it happen YOU WILL!!! There are excuses for everything in life and it’s up to you to justify your actions by giving in to those excuses that might be “easier.”

This will begin a possible series of blogs for getting it done, so let’s start with tip #1.

1. First, make a commitment by doing the following: If you really want to feed your family paleo GET THE CRAP FOOD OUT OF YOUR HOUSE!!

I recently received an email from, let’s call him, “Phil” and one of his comments went as follows, “A paleo lifestyle involves a lot more cooking, and a lot more planning than SAD (standard american diet).  Plain and simple.  You can pre-cook a lot of things, if you’re good at planning ahead. But a lot of people, especially those with kids, have incredibly tight schedules in the morning, and cooking, beyond throwing together a couple of pieces of toast is something completely foreign to them, especially in the morning.  Combine that with the pre-conceived notion of “breakfast foods” and you’ve just increased their anxiety levels unbelievably.  In short, they now believe
they can never succeed with the paleo plan, it’s just too much.“

“Phil” said it best when he mentioned peoples preconceived notion of what breakfast food should look like.  If a family followed rule number 1 by getting rid of all the crap, even on the busiest of mornings, a family would not have any other option but to figure out how to scramble a few eggs in the same amount of time it would take to toast, butter, and jelly several slices of bread.  My bet is that eggs are even faster and that if the toast is non-existent, after a few days, eggs might not start to look so “foreign” after all.  Or, make a triple batch of egg cupcakes on the weekend and you won’t have to cook at all, which is even EASIER than relying on the “normal” toast.

Now let’s talk about people either being “good” or “bad” at planning ahead.  As “Phil” mentioned, some folks are not good at planning ahead, but they appear to only lack this ability when it comes to FOOD.  We have to plan ahead to be successful at anything. Remember that thing on my long list of stuff do called laundry?  If none of us “planned ahead” and made sure that our PG&E bill was paid, the laundry soap and dryer sheets were purchased, and that a few minutes were set aside to wash, dry and fold, there would be a lot more nakedness going on than normal.

Everyone I know, smart, not so smart, or middle of the road ends up going to the grocery store now and then.  This is again when folks can choose to either buy a few useless items or they can take the opportunity to look at my blog, pick out three or four meals, buy the stuff they need, and cook those things for dinner throughout the week.  Put some meat and some spices in a slow cooker, get home and eat it, eat the leftovers for breakfast or lunch or both, and move on with life.  People can totally plan ahead, what people CAN’T do is ditch their relationship with sugar and processed foods.  That it is what makes eating paleo hard and that is every one’s hang up who comes up with 10 million excuses why they “can’t.”

I’ll say it again, what it really boils down to is if you WANT TO!  If you don’t want to, that’s 100% fine, but if you do want to, than use the tools and resources available to you and do it.  If you cave in and order a pizza, MOVE ON!!  Don’t drown in the leftover sauce on your plate, just shake it off and start fresh, don’t start over, just start fresh.  We make food a guilt trip ride that we can’t get off  and that really screws with peoples heads thanks to our media and the “diets” and the images of either doing something right or wrong.  It’s really all about living, eating good food, loving, and making choices.  I’ll say it one more time, even though it’s “hard” you can still do it if you REALLY REALLY WANT TO!!

Here’s what I have in my slow cooker right now.  It took me about 5 minutes to throw it in and I’m sure it will be delicious. 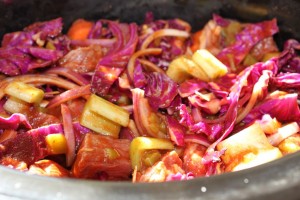 Dump it all in a slow cooker and cook for 6 -7 hours on low.