As parents living a paleo lifestyle, Halloween can be much more frightening than the expected glowing skeletons, howling ghosts, and silly monsters.  Halloween is scary because of the mountains of high fructose corn syrup and unidentifiable ingredient laden CANDY!!!  Around this time every year my inbox fills up with questions regarding what to do about Trick or Treating, kids, and the typical sugar battles that go along with Halloween. 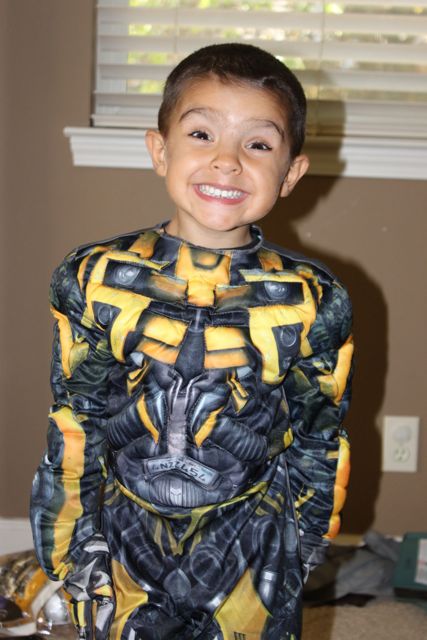 First, I’ll share with you how we have celebrated Halloween during our paleo years and I’ll also include some new tips and resources that I’m sure will prove useful as you plan for what should be a day filled with fun and fantasy, not tantrums and tummy aches.

The Fragoso Plan:  We do the typical pumpkin carving, dressing up, and trick or treating, but with a twist!  In the days leading up to Halloween, we make a traditional trip to our local pumpkin patch with the emphasis on having fun together as a family.  We pull each other in the wagons, jump in the bounce house, feed the animals, race through the hay bales, and of course wander through the pumpkins and pick out our favorites.

Instead of baking halloween cookies and filling up on candy, we make popcorn balls and roasted pumpkin seeds with the boys, prior to heading out to tour our neighborhood.  My mom started the pumpkin seed and popcorn ball tradition when we were kids; you see, she was not a candy fanatic either and we lived so far out in the country, trick or treating was not even an option, so every year we would look forward to making the gooey treats.

I know that popcorn, and most definitely popcorn balls do not necessarilly fall into the list of what folks consider to be “paleo” but on Halloween and as an alternative to the hoards of garbage that is typically consumed, a popcorn ball made with love, honey, and molasess is a lesser evil in my opinion and a fun way to continue my childhood tradition with my own kids.  Here is the recipe that we use:

1) In a saucepan combine the honey, molasses and water and cook slowly over medium low heat, stirring constantly until the temp on your candy thermometer reaches 250.

2) Add the butter and stir in until melted.

3) Have the popped popcorn ready in a large bowl and evenly pour the syrup over the popcorn and mix well with a spoon.

4) Once the syrup has cooled, grease your hands (and the kids hands) with more butter and form the sticky popcorn into balls!!

Remove the seeds from your carved pumpkin, wash off all the goo and dry with paper towels

2) Spread the seeds evenly on a baking sheet and sprinkle with sea salt.

3) Bake for about 5 minutes, or just until the seeds start to turn toasty.  Watch them carefully, they will burn quickly!!

For trick or treating, my kids almost, just almost like to hand stuff out just as much as they like to go trick or treating.  We will hand out pencils, erasers, bracelets, or other fun little toys all found at the Dollar store.  Yup, we are that family who does not had out candy but we haven’t yet had our house egged or kids run off crying.  In fact the response is typically, “Cool!!” or “Thank You!!”

When we go trick or treating we simply have a 2 piece of candy rule.  Maybe that sounds cruel but after popcorn balls, dressing up, carving pumpkins, and handing out treats, the kids simply know the routine at this point and are not all that excited about the candy that is so foreign to them anyway.  The rest either goes in the garbage or is donated the next day at Jaden’s school in exchange for a book.

This year I am considering changing up our typical routine just slightly by using an idea from Peggy of Primal Parent.   Peggy contributed an outstanding article to the latest issue of Paleo Magazine which was dedicated to ideas for paleo parents to make Halloween fun and survivable.  For her little one, Peggy purchases candy that is more acceptable such as organic dark chocolates, crsytallized ginger, small packages of nuts and dried fruits, honey sticks, and other more natural treats.  After an evening of trick or treating she will either simply dump the bad stuff in the trash and make a switch to the better stuff (which would probably go totally unnoticed by tiny tots) or for older kids, her idea is to set up shop and have your child trade the bad stuff for the good stuff.  For example, it will cost your child 5 pieces of junk candy for 2 pieces of dark chocolate.  Turn it into a fun game of “store” and say goodbye to the tummy aches!  I think I’ll try this plan with my Rowan and Jaden this year, they both love to play fantasy games and a Halloween game of store and trading and bartering might be extremely fun and a new twist to our old routine.

Coby, my oldest son, simply tossed his candy last year except for a piece or two and this year at the ripe old age of 16 he plans to hang out with his buddy and they will help us take the little guys out around the neighborhood.   Coby is also working on a blog post to share with a teenagers perspective on living paleo so stay tuned for that special article coming soon!

I hope this post helps to make what should be a fun filled holiday a little bit more stress free and enjoyable.