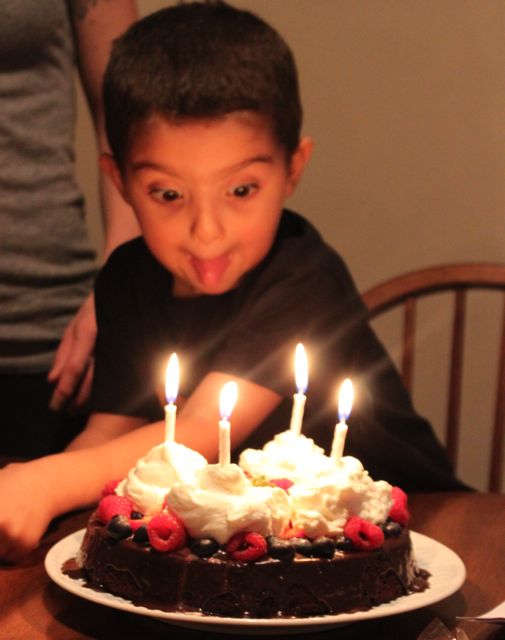 On October 27th, Rowan turned 4 and on October 30th, Jaden turned 8.  Time  really does fly and when I look at my little boys who keep getting so darn big, intense emotions run through me. If you are a parent, you know exactly what I am talking about and trying to express the above mentioned emotions into words really is impossible.

Anyway; we had a party for Rowan on Saturday and a party for Jaden on Sunday and let me tell you, it was a CRAZY yet fabulous weekend with lots of wonderful family and amazing friends.  In my opinion, birthdays are worth celebrating and what would a birthday be without the cake!  Over our last few paleo years I have attempted to make gluten free cakes from mixes of various store bought brands with some success but this year for the Jaden and Rowan I ordered gluten and grain free baking mixes from White Lion Baking Company and holy cow, they did not disappoint.

Rowan wanted a chocolate cake and Jaden wanted cinnamon bun muffins and both turned out phenomenally well.  You know the cake is good when non-paleo eating folks say things like, “This is the best cake I have ever had!” Or, “These muffins are out of this world!” Rowan’s chocolate cake mix came with a chocolate ganache topping that we made and used to drizzle over the cake and my amazing sister Laura decorated the cake with fresh strawberries, blueberries, and homemade whipped cream. For Jaden’s birthday muffins I followed the directions that came with the muffin mix for homemade cream cheese frosting which was just cream cheese, heavy cream and a touch of honey and I also added in some cinnamon as well.

If the thought of coming up with a grain free birthday cake seems daunting or you want to avoid the store bought gluten free cake mixes that are filled with rice flour and potato starch, I highly recommend looking into White Lion Baking Company.  The high quality grain free ingredients that they use in their products shine through in the amazing end result and I will most certainly be using this company again for my future baking needs.

At Rowan’s party he wanted a “party at home with a bouncy house” and that’s exactly what we did but  I’m pretty sure that the adults had more fun than the kids in the bounce house.

For party food we grilled up some hamburgers and Applegate Farm sausages and served them with lettuce wraps, sliced tomato, and onions.  I also made my No Potato Salad which is always a huge hit.  For snacks before dinner we had guacamole, fruit, veggies, salami and cheese and corn chips. Corn chips and cheese are a safe party staple for us.  No one feels horrible if we eat a few chips and slices of cheese and it’s nice to have these alternatives for a “cheat meal” (although I hate that terminology) when we want to kick up our heels.

For Jaden’s party we went to our local gymnastics academy and several of his friends from school attended the party.  I was wondering how the cinnamon bun muffins made with almond meal and coconut flour would be accepted by a bunch of 3rd graders, especially topped with homemade cream cheese frosting that really wasn’t that sweet at all. Surprisingly, all but two of the muffins were devoured and this is from a group of kids who are most likely used to the conventional cupcake.  Hurray for real food!  The snacks at the party were a duplicate of what we had for Rowan’s party the previous day.

It was such a blast watching the kids run around and play and the highlight at the end was the awesome zip line!  Check out Kayden of Growing Up Paleo and Rowan taking on the zip line like the big kids. Even after Kayden’s spectacular landing, the first thing he said was, “Let’s do it again!!”

Overall, the parties were successful, the kids had a blast, and my little boys are another year older but somehow I’m still only 25.  Amazing how that works, isn’t it??

Happy birthdays to my sweet little Row Row and my big guy Jaden!